Under normal circumstances, all meetings commence at 7.15 p.m. with Notices followed by the lecture at 7.30; however, while the current pandemic continues, delivery of our programme of lectures will be via Zoom and details will be updated.

Our first Zoom lecture will be taking place in September 2020 and details can be found below.  The programme for October and November will be amended as soon as the details are available.

The Richest of Legacies: The British Colonial Buildings of India

A lecture about colonial architecture in India – the buildings, their history & their future

This lecture commences with a brief appraisal of attitudes towards the 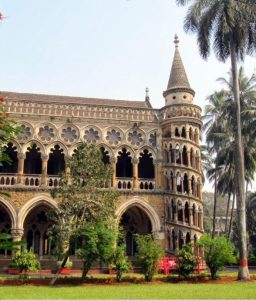 British Empire and concludes with a quick look at efforts being made to preserve the buildings of the British Raj.  In between, consideration is given to the very best of British colonial architecture in India.  Commencing with the East India Company era, churches and mausolea of the mid-17th century, the lecturer takes his audience on a round India journey giving centre stage to the most impressive and unusual buildings of Madras (Chennai), Mumbai (Bombay), Kolkata (Calcutta), the military cantonments and hill stations.  This whistle-stop tour is completed with a brief look at the grandest of imperial buildings, William Emmerson’s Victoria Memorial in Calcutta and Edwin Lutyens’s Viceroy’s House, New Delhi.

This lecture explores the life and legacy of the 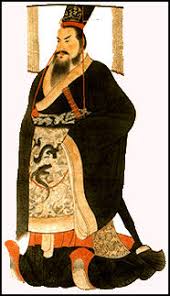 will consider Emperor Qin’s substantial achievements that would establish the foundations for over 2000 years of Imperial rule. Emperor Qin was not only an accomplished bureaucrat, having standardised the language, currency and commerce of the Empire, but he would define the protocol of the Court though Regulated Court Costume and Insignia of Rank which would serve China until the overthrow of Imperial Rule in the early 20thCentury.  Substantial infrastructure was created under his leadership, but it was, however, Emperor Qin’s obsession with his own immortality, and the afterlife, that would provide the world with his greatest legacy.

The Necropolis of Emperor Qin

Whilst the lecture will focus on the most famous aspect of the Necropolis: The Terracotta Army consideration will also be given as to how this forms part of a vast site, the World’s largest Archaeological Site, with the, as yet, sealed Emperor’s Mausoleum at its centre.  The lecture will provide an insight into current theories regarding construction plus ongoing excavations and future projects. 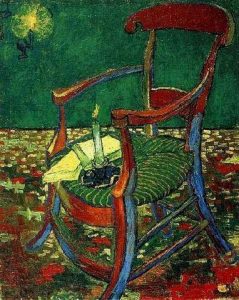 simply signed his work ‘Vincent’.  We are all aware of the recent exhibitions and the remarkable prices realised for this humble artist’s work.  Most of us appreciate the beauty of his efforts but how much do we know about the man himself? This lecture considers exactly why, despite barely selling a painting and his sudden death in poverty, no art historian today denies his genius.  There are extraordinary, little know facts to be revealed, while enjoying the remarkable range of his talent.  Though seeming so extreme and exceptional, the tragic story of his loveless life is deeply moving and his humanity makes a lasting impression.

“There’s a grief that can’t be spoken

There’s a pain goes on and on

Now my friends are dead and gone.

Here they talked of revolution

Here it was they lit the flame

Here they sang about ‘tomorrow’

LYRICS FROM THE MUSICAL  LES MISÉRABLES

“Thank you very much indeed for the fascinating lecture. You took us on an absorbing, fascinating journey as you spun his life and times into a palette of reality and colour and design, with its joy and tragedy. It was  thoroughly enjoyed and appreciated and it was a great pleasure to have you back in Wellington.”  Jane Kirkaldie – Programme Sec. DFAS Wellington NZ

Inspired by the Australian landscape and the major art galleries in Sydney, Melbourne, 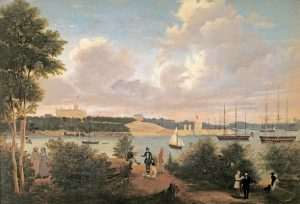 Canberra and Adelaide I have created a lecture that explores its extraordinary climatic contrasts prompted by Dorothea McKellar’s celebratory poem ‘My Country’.  The patterned hands of ancient Aboriginal cave paintings; the dreams of pioneers; the unique botanical treasures; the glorious light captured by the Heidelberg School, Australia’s own Impressionists; and, finally, the rediscovery of its indigenous art are all explored in this lecture.

In 2008 I presented a BBC Radio Four series called ‘A Sunparched Country’ for which I researched and travelled around eastern Australia.

The Age of Jazz in Britain

What was the public reaction to jazz when it began to appear in Britain in the aftermath of the First World War?  What did early jazz sound like and how did British musicians learn to play in the style?  How did British artists and designers react to the new rhythms and colours of the music? 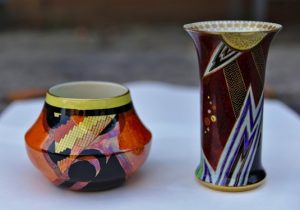 Following on from the Arts Society/Two Temple Place ‘Rhythm and Reaction’ Exhibition which I curated in 2018, this lecture explores how jazz arrived in Britain and the impact that it had on musicians, artists and the wider public.  The lecture is illustrated with examples of visual art, including works not shown in the exhibition, and recorded music examples.

This Lecture has been cancelled – please see Chairman’s Notices.

The Magnificent Maya, Fact and Fantasy

The Maya created one of the most sophisticated civilizations in the ancient world. Their

achievements in the arts and sciences, along with their complex social, political and economic systems, make them one of the most remarkable culture groups in the pre-Columbian Americas.  These people brought us an intricate calendar system, complex hieroglyphic writing, some of the largest pyramids in the world, a form of ballgame that was like no other and, most importantly, chocolate! This lecture will discuss the major achievements of the Maya as well as pointing out the common misunderstandings we have of this remarkable civilization.

The original Lecture has been cancelled and Celia Kilner will now be giving a lecture via Zoom on Fantastic Beasts and where to find them in Huddersfield. 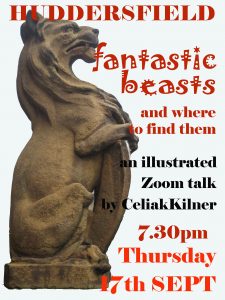 The link to this Zoom lecture will be sent out by email during the twenty-four hours before the lecture is scheduled to commence.

CAROLINE KNIGHT BA (Hons) MA (Courtauld)
GRINLING GIBBONS: MASTER CARVER TO THE CROWN
Caroline Knight is an Architectural Historian, trained at the Courtauld Institute of Art and specialising in 16th to 18th century English and Scottish architecture. She has been a Lecturer at the V&A on year courses and short courses, lecturer for the Art Fund and for the Royal Oak Foundation in the US. Caroline researched and wrote a history of Kensington Palace; contributed to a book on the Cecil family and has written several articles on architectural and social history and the history of travel.  Caroline also wrote “London’s Country Houses” (2009) and has contributed a chapter to a history of the Royal Academy (Yale, forthcoming).

BALLS AND PARTIES: Legendary festivities from Jubilee to Proust.

Dr Benjamin Wild is a cultural historian. He is currently Lecturer in Contextual Studies (Fashion) at the Manchester Fashion Institute (Manchester Metropolitan University). His second book, A Life in Fashion: The Wardrobe of Cecil Beaton, was published in 2016 by Thames & Hudson. He has recently published Carnival to Catwalk: Global Reflections on Fancy Dress Costume with Bloomsbury.