17 January John Osborne MA (Cantab)
Behind the Veil: The Art of Islamic Persia

Iran – or Persia – has a sophisticated cultural heritage frequently ignored in the headlines. The main part of the lecture illustrates the development of the spectacular architecture in the mosques and palaces of Iran, with an emphasis on their brilliant tilework and painting, through the Islamic period until the end of the 19th century. There are mentions of some of Persia’s classic gardens, and the art of book illustration is also included, with beautiful examples from the classic period of Persian miniature painting. The lecture mentions the geographical and political background, explains how the Shi’a form of Islam originated and became the ruling creed in the late 20th century Iran of Ayatollah Khomeini, and thus puts the contemporary situation in the context of the country’s fascinating and significant cultural history. 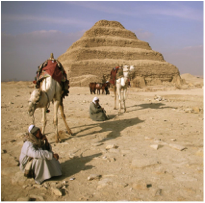 Who was Tutankhamun? The Boy King Behind the Greatest Treasures Ever Found

Through five thousand years of history the name of one apparently insignificant boy stands out in Egyptian history above all others. But who really was he? Hieroglyphics have only comparatively recently been rediscovered, opening up so much meaning from the desert sands. This lecture puts Tutankhamun in the context of Egyptian civilization, considers all that is known about him and the great legacy of his discovery. It also tells the remarkable story of that discovery in 1922 and illustrates many of the most fabulous finds in what was perhaps history’s greatest hoard. But it also asks, when it is appropriate to dig up the remains of the deceased and what has really been learned from so much research. It is hard for the modern mind to conceive such apparent faith and commitment and perhaps equally hard to resist “dissecting” everything to find some “inner truth”. What was actually found is here revealed. 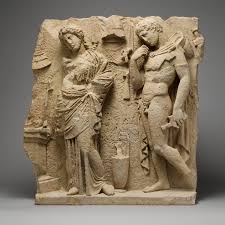 A tour of the Mediterranean is a visit into the past; ancient sites are littered with ruined architecture and museums are full of works of art testifying to once great civilizations. This virtual tour of the Mediterranean will reveal not only who those civilisations were and how they fit together into a ‘big picture’, but especially how you can you identify whose art or architecture are whose. You’ll never look at ancient sites in the same way again …

As we mark the 500th anniversary of Leonardo’s death this lecture will explore Leonardo’s multiple lives as an artist, inventor and visionary; our very embodiment of what it is to be a genius. We are all aware of the many works of art created by Leonardo da Vinci, but there are in fact very few paintings by Leonardo, so what else did he create? This lecture will begin by looking at some of Leonardo’s greatest works of art, but it will also delve into Leonardo’s exploration of and obsession with nature and how this might relate to his art and the human condition.

16 May Dr Natalia Murray BA MA PhD
Russian Art in the Service of the Revolution: Creation of the Soviet Myth? 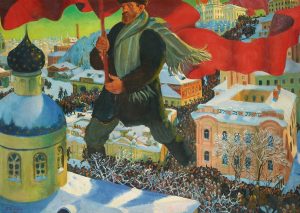 Already in 1917 the leader of the new Bolshevik State, Vladimir Lenin, proclaimed that culture should support political needs, which effectively meant that all culture was now viewed as propaganda. Like Lenin, Trotsky believed that ‘the essence of the new culture will be not an aristocratic one for a privileged minority, but a mass culture, a universal and popular one.’ This lecture will examine the impact of the 1917 revolution on artists and the quest of the new government for a new form of proletarian art. How was this to be defined? How would it come about? Where did it go?

Rabindranath Tagore (1861-1941) is arguably the most important Indian artistic figure of the modern era. The first Prime Minister of India, Jawaharlal Nehru, claimed that he had two gurus: Gandhi and Tagore. A renowned poet, novelist, composer and painter, Tagore is also the only person in history to have written the national anthems for two countries (India and Bangladesh). He became a global sensation when he won the Nobel Prize for Literature in 1913, the first non-European to do so. This lecture provides an introduction to Tagore’s remarkable life and work, including his novels, poetry, songs and paintings. It also explores the role Tagore’s art played in the story of India’s fight for independence.

Ceramics are part of everyday life, from the cups that we drink from to other, less obvious but equally useful vessels. But the products of modern industry are just the final development of a process that started in Britain 6000 year ago. In this talk Julian Richards examines Britain’s potted history from the simple products of the early Neolithic, through the introduction of the potter’s wheel and the kiln to the first pottery industries and the search for the secrets of porcelain. 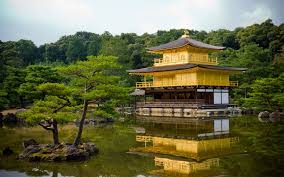 The reputation of Japan as a country fabulously rich in silver and gold reached the west in the 14th century through the writings of the Venetian merchant and explorer, Marco Polo. Gold was used generously to adorn Buddhist icons in Japan from the sixth century when Buddhism was introduced from Korea, and for centuries gold was considered to be the most appropriate precious material for decorating Buddhist halls and statues. This lecture examines the significance of gold in Japanese Art as the symbol of the sacred on one hand and the symbol of wealth and power on the other. 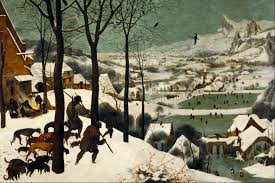 In 2019 it will be 450 years since the death of Pieter Bruegel the Elder in 1569. This Flemish artist is probably best known for his colourful depictions of peasants making merry or toiling in the fields – works that lent him the epithet ‘Peasant Bruegel’. He also painted religious scenes often set in the Netherlandish countryside, but his work is more than just charmingly naive. He travelled to Italy and developed a good eye for landscape, a genre in which he became a pioneer. He was also an important graphic artist while his paintings were collected by distinguished clients. Yet he also lived in a time of religious and political turmoil that is echoed in some of his ‘darker’ works. This lecture will show that there is much more to Bruegel than just peasant scenes.