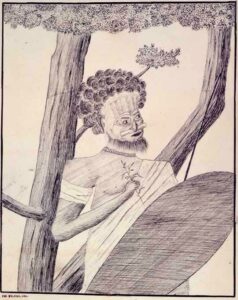 Inspired by the Australian landscape and the major art  galleries in Sydney, Melbourne, Canberra and Adelaide Caroline has created a lecture that explores its extraordinary climatic contrasts prompted by Dorothea McKellar’s celebratory poem My Country, the patterned hands of ancient Aboriginal cave paintings, the dreams of pioneers, the unique botanical treasures, the glorious light captured by the Heidelberg School, Australia’s own Impressionists, and, finally, the rediscovery of its indigenous art.  In 2008 Caroline presented a BBC Radio Four series called A Sunparched Country for which she researched and travelled around eastern Australia.

Caroline has lectured in the UK, Australia, New Zealand, USA, Europe, Japan and on cruises to the Baltic, Mediterranean, Caribbean and Indian Ocean.  In 2017 she returned to The Arts Society in New Zealand.  She lectures for the University of Cambridge ICE (Course Director for International Summer Programme), the Royal Horticultural Society, museums, and specialist travel companies.  Caroline is a Consultant Designer specializing in evoking historic, artistic and symbolic references and the author of eleven books including Water Lilies and Bory Latour-Marliac; The Genius behind Monet’s Water Lilies; Impressionists in their Gardens; Follies of Europe: Architectural Extravaganzas; Monet at Giverny and Icons of Garden Design.  Her theatre productions are: How does your garden grow Mr. Shakespeare and Impressionists in their Gardens: living light and colour and she is a presenter and contributor on television and BBC Radio 4.  In 2017 Caroline was the recipient of the Herb Society of America ‘Elizabeth Crisp Rea Award’.