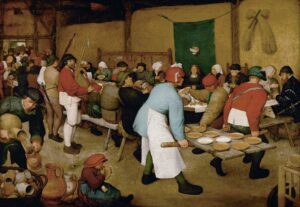 What does “Renaissance Art” mean?  The paintings, sculptures, and architectural forms of the 15th to 17th centuries were never ‘art for art’s sake’.  Art was doing a job of work: communicating messages about a new world order that was coming into being.  Art was expressing the conflict of traditions and values that powered the Reformation and the Counter-Reformation.

By focusing on a selection of representative artists and artworks, this lecture will unpack the ferment of ideas implicit in Renaissance art.  We will range from Michelangelo’s Rome to Shakespeare’s London to Rembrandt’s Holland but our survey will demonstrate that art was the common language of an age of turmoil and a way of thinking about a changing world.

Dr Faulkner was educated at King’s College, Cambridge and the Institute of Archaeology, UCL. He works as lecturer, writer, archaeologist and occasional broadcaster.  He is a Research Fellow at the University of Bristol.   Dr Faulkner is also Editor of Military History Monthly; Director of Sedgeford Historical and Archaeological Research Project and Director of the Great Arab Revolt Project.   He is author of The Decline and Fall of Roman Britain; Apocalypse; Hidden Treasure; Rome: Empire of the Eagles; The Ancient Greek Olympics: a visitor’s guide and author of the forthcoming Lawrence of Arabia’s War.  His major TV appearances include Channel 4’s Time Team; BBC2’s Timewatch; Channel Five’s Boudica Revealed and Sky Atlantic’s The British.

Thursday 18th November at 7.30pm (via Zoom or at a venue to be confirmed).